Drumming Up Something New: Yamoussa Camara 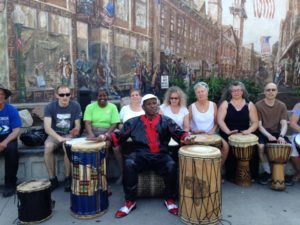 It’s my husband’s turn to set the beat for the drum circle. He’s playing a dundun: a tall, rawhide-covered bass drum that he’s beating with sticks. He pauses thoughtfully for a second; then, akin to the name of the drum, he lays out a simple dun dun DUN. Three beats: dun dun DUN, dun dun DUN. The other drummers start to join in…and something starts to emerge. A man in the back starts quietly, “We will, we will, rock you!” There are few chuckles from the crowd gathered to play, and it’s not long before everyone is not only drumming but also singing along, caught up in this experience of West African drums meets classic Queen. My husband catches my eye, grins, and shrugs before he turns his attention back to his own dun dun DUN contribution.

Although the sounds emanating from Heritage Plaza every Sunday aren’t always recognizable as iconic tunes, there’s definitely something special happening at Yamoussa Camara’s weekly drum circles. Participants gather together to share not just Camara’s djembes, but to participate in a larger community experience of making music and, simply, having fun. “People are very nice when we come to the drum circle,” Camara says about his experience leading. “Everybody is very nice. Everybody has a good time. Socialize, talk. That’s what the drum circle is about: bringing the community together. That’s my goal. That’s what I’m doing in the United States.”

While Camara has been working to bring communities together in the US for the past 22 years, he’s a new and welcome member of our Blair County community. Born in Boke, Guinea, West Africa in 1966, Camara immigrated to the US in 1995. By this point, he was already an esteemed performer, having had the distinction of being the youngest lead drummer in Les Ballets Africains. He established his American career, teaching drum and dance at Yale University for over 10 years and touring the country teaching, performing, and choreographing for numerous music and dance ensembles. Before Altoona, his home base was Pittsburgh, and he still spends much of his time there. Though now living here, he retains teaching positions at Carnegie Mellon University, Point Park University, and the University of Pittsburgh. When asked about how Altoona has become his home, Camara smiles toward Valerie Metzler, a Martinsburg native and his wife as of April. “I think she could tell you how I got to Altoona,” Camara jokes. 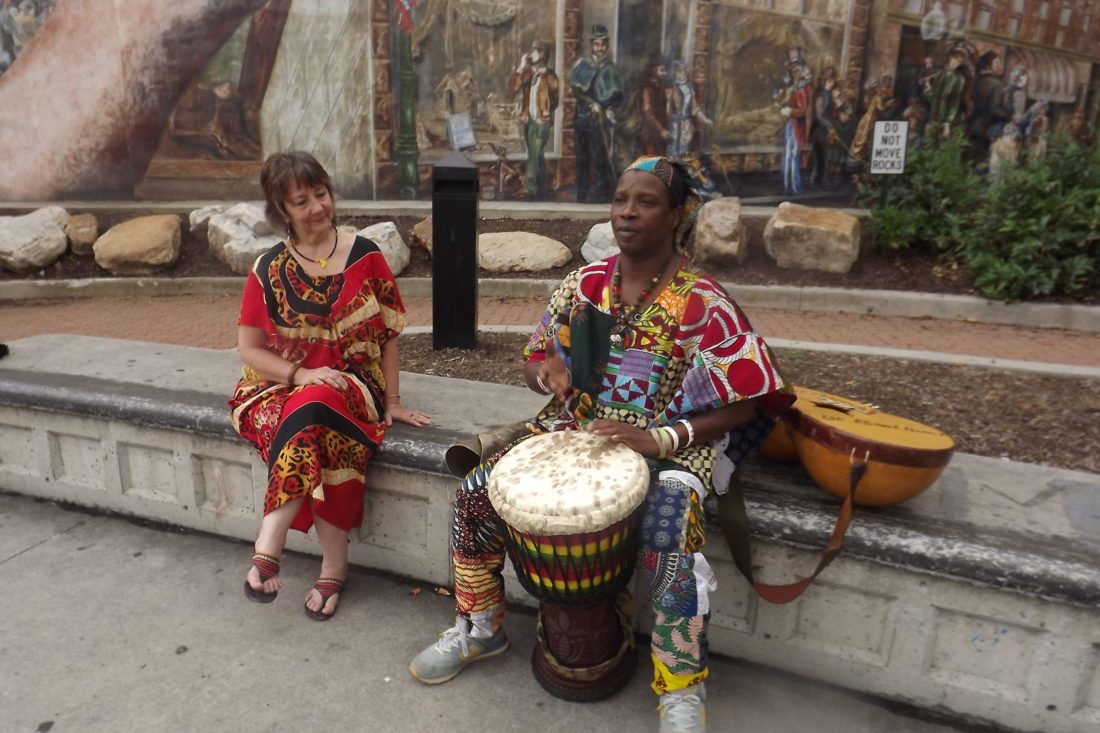 Together, Camara and Metzler are infusing our region with unique cultural opportunities, and they’re anxious to see how these experiences will impact our community. They’re working tirelessly to show that there’s a place in Altoona for the marching band on Friday night and a drum circle on Sunday – and that our community will be more vibrant because of this. “I’m not here by myself to do this,” Camara says. “There’s many, many people who want to make this work. With everybody’s help, we’re bringing the community together. And happiness with every family and everybody who’s interested in helping Altoona to grow. We help each other and make everyone happy.” From my family’s experience at the drum circle, Camara and Metzler are succeeding. Mary Lou Appleman, an Altoona resident who was enjoying listening to the drum’s beats and dancing along, said that the drum circles are “good for the community. Different people will come together to do this. The rhythms are natural, and it’s really cool.” Mary Lou’s husband, Lee, a semi-retired drummer for Touring Broadway, added that Camara’s drum circles are “the best thing that’s happened to downtown Altoona since [he] was a kid.” 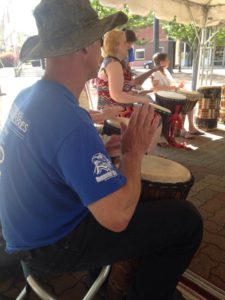 For Camara and Metzler, this is a great starting point. Metzler emphasizes that it’s a desire of hers to see downtown Altoona thrive. She says, “It takes the whole area to make downtown viable. I think that if we bring different cultural experience, artistic experience that people aren’t familiar with, it’s going to yield bountiful benefits in all kinds of areas: bringing people together, better understanding of people. Drumming and dancing are such a great way to do that. One thing that makes bringing West African dancing to here is that it is unknown here, so nobody can say, ‘Oh, I can’t do that.’ Everybody’s a beginner. So, we’re all in the community learning together.” For Camara, this unity is not just strengthening Blair County’s community, but also changing the direction of our collective story. As he explains, each beat from an African drum is its own story. By participating in a drum circle, drummers share their personal tales and offer their feelings to everyone involved. Camara says, “You bring your feeling to your drum, and we all feel that. That will bring the community together.” Camara’s drum and dance are uniting residents in an experience that’s ultimately shaping our regional story – and Blair County is becoming richer for this. There’s a place for everyone at the drum circles: children, adults, experienced musicians, amateurs, participants, observers…and even those who just want to rock you.