P&J Celebrates a Farewell Season and a Lasting Legacy

“Where is the good in goodbye?”

That quote from Meredith Willson, composer of the hit Broadway musical The Music Man, rings especially true this production season in the Altoona arts community.

P&J Productions, which was created thanks to The Music Man, is marking its final season. The team of Neil Port and Will Jones met in 2005 during auditions for a regional production of the musical. The duo immediately clicked and formed P&J with the goal of promoting musicals written by Jones.

Over the years, the company has delighted many by producing Jones’ original works, presenting regional musicals, and promoting shows by national touring acts. P&J has donated thousands of dollars to charity based on proceeds from their events.

Port, a local entrepreneur and U.S. Army veteran, has always enjoyed a passion for the arts. He began piano lessons at age 5, and he played in a variety of bands starting with the trombone in Paul Winter’s Little German Band in 7th grade. As an adult, he performed on stage with local community theatre groups.

Jones’ musical roots date back to an early age, too. He composed his first song when he was just nine years old. Growing up in Buffalo, he performed in rock bands. A veteran of the U.S. Marine Corps, Jones has written music for radio and television commercials. A production company performed his first theatrical musical, A Christmas Caroled, in 1999. 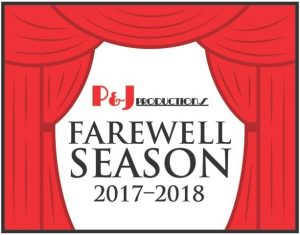 After 12 magical years of collaboration, the farewell season of P&J Productions is underway.
Jones cited a combination of factors that led to the beginning of the end for P&J including his various freelance projects and his role as Promotions and Production Manager of Altitude Entertainment – the events and promotions arm of the Altoona Mirror.

“Mr. Port and I discussed for months the possibility of P&J ending because of these factors,” Jones stated. “Neither of us wanted to see P&J simply fade away. It was a difficult decision, but we decided to place a limit on the company with a farewell season. Our intent was to go out on our terms, on top, and with a bang.”

This final season kicked off in May with a concert marking the golden anniversary of The Beatles’ Sgt. Pepper’s Lonely Hearts Club Band. In June, Port and Jones appropriately reprised their version of The Music Man.

“It was bittersweet,” Port said. “The Music Man was the show that brought us together. We both have a special place in our hearts for that show.”

Added Jones, “Being on stage with (Port) in this show brought back so many precious memories. I will always be grateful for this show because it brought us together, and he has been a friend and mentor ever since.”

In October, P&J will present The Wizard of Oz at the Mishler Theatre.

Jones is writing a new show for June of next year – The Legend of Sleepy Hollow. It will be P&J’s final act.

“P&J Productions’ first show was one of mine, so it seems only fitting that our last would be the world premiere of a William Allen Jones original,” Jones mentioned. “I am extremely excited to share it with Central PA. People will love Sleepy Hollow!”

Although that final production is still months away, Port predicts the end of the P&J era will leave him with a sense of accomplishment. 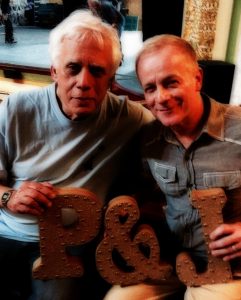 Neil Port (left) and Will Jones, of P&J Productions.

community, and along the way, we’ve given a good bit of money to charity,” he said, proudly noting that the amount stands at about $108,000.

Jones believes P&J has made the arts more accessible in the region, pointing out that many fans who attended P&J shows had never even been to the Mishler Theatre.

“P&J carved out its own audience and, in the process, benefited other organizations by opening up new people to their performances as well,” he said. “That’s something we are happy about for sure.”

And as the community bids adieu to P&J, Port and Jones remain optimistic for the future of the local arts.

“It makes all the sense in the world, largely because that’s where the Mishler Theatre is located, which is a real jewel,” he remarked. “It seems to be the natural place for the arts to grow from and evolve.”

A vibrant downtown arts core, he added, is an asset in attracting young families and business people to the region.

“When you show them a community that has wonderful art, it’s a great selling point,” Port said.

Jones sees the arts expanding in other ways. He believes people are beginning to think outside the box when it comes to bringing the arts to audiences versus expecting folks to just show up for events.

“The average person is hungry for the magic of the arts, and we must never write them off,” he insisted. “P&J proved you can win people over to the arts and, in the process, give back to the community in significant and important ways.”

It is clear there really is a lot of “good” as we say “goodbye.”