Nosferatu: Behind the Scenes! 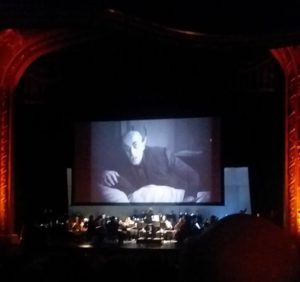 Nosferatu at the Mishler

History was made Saturday Oct 28, 2017 at the Mishler Theater in downtown Altoona before a packed house. Maestra Teresa Cheung, now in her tenth season as the Altoona Symphony Orchestra’s artistic director, led the orchestra in the original score from the 1922 German horror film “Nosferatu”.  While the original movie, remastered, was shown on a 20 x 40 foot screen, Director Cheung led the orchestra through a score ranging from the upbeat and light to bone chilling and haunting.

A stunning blend of the visual and the audio that was performed in North America for the very FIRST time.  EVER !

Nosfertau, A Symphony of Horror was filmed in post WWI Germany. The war is over and a new democratic republic is trying to figure itself out. Maimed veterans are everywhere on the streets, and the widows are trying to make ends meet. But there is also a spirit of experimentation in the air, an urge to make everything new and afresh. Into this tumultuous atmosphere, F.W. Murnau’s film, a Dracula Story, premiers. It practically invents the horror film genre.

But there is a back story that audience members and you our readers may not be aware of. Saturday’s performance was years in the making. Collaborating with Penn State Altoona professors Jutta Gsoels-Lorenson and Timothy Melbinger, Maestra Cheung began the process of sourcing the original score and obtaining the license to show the film from its American distributor.

There are two versions of the blue-ray encoded film: one version the audience sees and the other that the conductor sees with all of the music score ‘timings’ edited into.   And there were other technical issues that needed to be addressed. Our Mishler Theater is an amazing performance venue but did not have the technical infrastructure needed to pull off this performance.  A bigger screen was needed and a way to suspend that screen above the orchestra.  Blue-Ray players that would accept the German produced discs needed to be sourced.    At a series of meetings with Altoona Symphony staff, Mishler technical people and IT pros from PSU Altoona collaborated on what was needed and where and how to source what was needed. ASO Executive Director, Pam Etters (and ArtsAltoona steering committee member) drove to pick up the required screen  in Pittsburgh from a theatrical rental supply company.  And tech folks put their heads together here to solve all the other issues.

I saw the score for this production. It must be two inches thick!   I don’t know how many times Teresa practiced this in her home, ‘air conducting’ the score as she watched the movie to make it become automatic to her. Much the way a professional athlete imagines themselves performing their sport over and over again until ‘muscle memory’ eventually drives the performance. It worked!  She had every note, every movement down to a “T” when she stepped onto the  first rehearsal stage with the orchestra.

The orchestra. Is it any wonder that our musicians adore her? These professionals travel from near and far to perform for her because she challenges them and provides them with musical experiences that they may never have had or will have again in their playing careers.  Whatever their musical comfort zones are, she finds a way to stretch them further.  Many have decades of professional performance experience and never have the opportunity that they had here in Altoona, this past Saturday evening on the Benzel Stage of the Historic Mishler Theater.

For this was the first time anywhere in North America that a conductor was professionally brave enough to risk their artistic reputation by attempting to perform this classic masterpiece.

Cheung rose to the challenge of pacing the music with the images on the screen. The majority of the ‘stingers’ and other important conjunctions of music and drama were simultaneous.  The orchestra succeeded in the endurance test, for the music was relentless .

And reader, this all happened in downtown Altoona.  We are rapidly becoming the creative and cultural center for Central Pennsylvania.  Every time I hear someone say that this a “dead community” , I want to scream.  And so should you!  It is no longer acceptable to have someone say “there is never anything to do here” without asking them if they live under a rock.

There are few places in our Commonwealth that have the richness of the outdoors and the recreation that Blair County offers, the low cost of living, and the opportunities to find and keep family sustainable jobs, the infrastructure in place to help you start your own business , and has the low crime rate that we enjoy here.

And now, thanks to the Altoona Symphony Orchestra and Maestra Teresa Cheung, we can say that this is the only city in America that has enjoyed the showing of the original movie Nosferatu accompanied by an orchestra playing the original music score.

And now you have the story, behind the story.