Arts Community Members Thank Those Who Inspired Them

Altoona native Tim Boyles has photographed celebrities Kevin Costner, Mick Jagger, Taylor Swift, John Travolta, and many others. When successful artists like Boyles rub elbows with the Hollywood elite, they might easily forget their roots and who helped steer them to the pinnacle of their craft. Boyles, however, is quick to recall where it all began.

“I am forever thankful for the U.S. Navy for giving me the training that got me started in photography,” said Boyles, whose celebrity photos were displayed at the Southern Alleghenies Museum of Art in Altoona earlier this year. “They taught me thoroughly and then gave me the tools and the passion to take photographs that make an impact. I carry their teachings to this day and fall back on them in every shoot I do.” 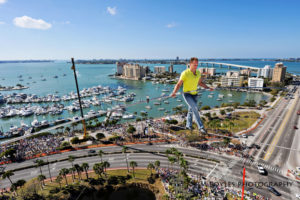 One of Tim Boyle’s Many fine photographs.

Boyles is one of the many individuals in the local arts community who recognize that Thanksgiving is not really about turkey, football, or early Christmas shopping. Rather, it is a time to pause and truly recognize our many blessings, including the people who have inspired us to be who we are.

Cristin Burwell danced professionally with Pacific Northwest Ballet in Seattle and then became Artistic Director of Allegheny Ballet Company. She now jokes that she retired in her “old age.” She does not joke, however, about the great people who supported her over the years.

“While I had many inspirational people that helped me to achieve my goal of becoming a professional dancer, I am most thankful for the love and support of my parents,” she stated.
“Their constant devotion to helping me in every way possible was never-ending.”

Burwell is also appreciative for the instruction and guidance of Deborah Anthony, who she said created and directed a program that facilitated Burwell’s career.

“Many little girls dream of becoming a ballerina, and with the dedication of these incredible people, I was able to accomplish my dream,” she remarked. 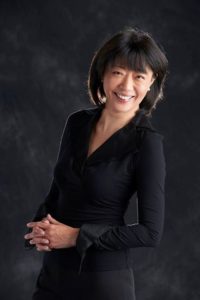 As the Altoona Symphony Orchestra prepares for its annual “Home for the Holidays” concert, Maestra Teresa Cheung is pausing this Thanksgiving to acknowledge someone who motivated her to hit the right notes in her remarkable career.

“The most influential person in my musical life is my music teacher in junior high and high school,” Cheung explained.  “Mr. Geoffrey Weaver came to our all-girls parochial school from England. He is a fantastic musician in the true essence of the term: music is his life! He exuded so much vitality and joy while he was making music with us, and he left many of his students no choice but to follow his footsteps.”

Calling Weaver “the ultimate Pied Piper,” Cheung said many of her classmates have become musicians because of him.

“I am so very grateful for him and for the love for music that he has instilled in us,” she mentioned.

Violist Melanie Ramsey is also quick to recognize the great music teachers from her school days. She started playing the viola in sixth grade. Now a musician with the ASO, she is most grateful to her late mother – a proponent of the arts.

“She fostered her love of music, literature, and art in her children and was proud of their many accomplishments,” Ramsey said. “Thank you, Mom!”

Jonathan O’Harrow, President of the Blair County Arts Foundation and an actor/director with Altoona Community Theatre, admits he has been fortunate to meet and work with many talented artists.

“If I had to choose just one person to thank – aside from my parents, of course – it would have to be Karen Volpe,” O’Harrow confessed. “Over the last 27 years, Karen has been my teacher, my director, my mentor, my collaborator, and my friend. So much of who I am as an actor, director, etc., is influenced by Karen. She’s the best!”

Actress Amanda Holtz credits a fellow drama club member from her college days in Pittsburgh with being a guiding light on and off the stage.

“My good friend, Darien “DJ” Dukes, Jr., helped nurture my love for the arts and has played a huge impact on my life,” stated Holtz, who has performed with ACT and P&J Productions. “Between class times during free breaks, he used to hold free workshops for anyone who wanted to improve on their acting.”

During those workshops, Holtz recalled Dukes helping performers with line memorization, character development, and many other concepts of theater.

“I respect him so much and am thankful for his mentoring,” she added. “Anytime I audition for a show here locally, he is the one person I turn to for guidance and encouragement. He is happy for me when I do well, and when I have a bad audition, he is kind and works to help me improve for the next one. I am thankful for his help and to have him as a friend.” 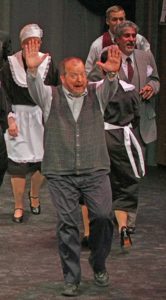 Eric Wolf, President of the Board of Directors of ACT, does not have to think long and hard for the arts role model in his life. The late Eleanor Lantzy, founder of the Cresson Lake Playhouse, put the charming theater on the map, he noted.

“The quote from the National Endowment for the Arts was that the Cresson Lake Playhouse was ‘the little theater that could,’” recalled Wolf, General Manager of AMTRAN, and veteran actor/director with ACT and Cresson Lake Playhouse. “They were just amazed that this community theater was successful out in the middle of nowhere in rural Pennsylvania.”

Lantzy, who served as Executive Director of the Playhouse for about eight years, was Wolf’s mother’s best friend.

“The joke around her hometown of Spangler was that she could get blood from a rock, and if you saw her coming down the street, you wanted to cross to the other side because she was going to ask you for money for the Cresson Lake Playhouse,” Wolf added.

Artist Allen Capriotti credits his parents and the religious sisters who taught him at the former Saint Patrick School in Gallitzin for fostering his early interest in art. His time at Mount Aloysius College in Cresson was also key.

“We had seven great teachers who were practicing artists in fine arts, only 11 students, and a large building dedicated to only art,” recalled Capriotti, whose paintings are considered within the tradition of American realism. “Each (teacher) gave me so much – Sister Maria Josephine, Heidi Osborn, Frank Gilliam, Mrs. Sailor, to name a few.”

After studying illustration and design at the Tyler School of Art in Philadelphia, he eventually returned home and connected with Altoona artist John Rita through the Albert Michaels Gallery. Now, 40 years later, the two are still friends.

Clearly, members of the local arts community have much for which to be thankful. In that spirit, we at ArtsAltoona are grateful for all of the gifted artists, dedicated staffers, committed volunteers, and loyal supporters who make Altoona home to an arts scene that is sweeter than even the best pumpkin pie. Happy Thanksgiving!