It goes without saying we all want to add years to our life, but maybe it is more important to add life to our years. 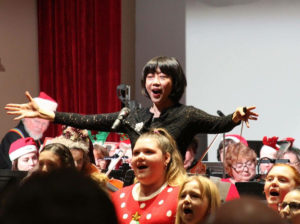 ASO Maestra Teresa Cheung sings Christmas music with students from the All City Youth Choir during the Home for the Holidays concert at Homewood at Martinsburg on December 1.
Photo by Harald Dertinger

That message is reflected in a small mural inside the new Bice Memorial Chapel and Givler Cultural Center at Homewood at Martinsburg. “Residents love it,” proclaimed Ernie Angell, President and CEO of Homewood. “They’ve really embraced the new area.”

And who can blame them? The worship space features a stage for the performing arts, a high-tech audio visual system, and seating for a few hundred people.

Already a reputable retirement community, now the facility boasts a wonderful venue for cultural experiences that truly enrich the spirit and can, indeed, add life to years.

Homewood had outgrown its previous chapel, Angell stated. Eventually, it was decided to take advantage of an open field next to the building and expand.

“We thought, ‘let’s not just have a chapel, let’s make a cultural center,’” he recalled.

In its short existence, the facility has hosted the Altoona Symphony Orchestra twice – including a Christmas concert earlier this month. Maestra Teresa Cheung and company performed a modified version of the Home for the Holidays concert that the musicians performed the following night at the Mishler Theatre in Altoona.

Other music groups from Martinsburg and surrounding communities have performed at the center, Angell noted. The venue has also hosted plays, and talent shows.

Homewood has five locations in Pennsylvania and Maryland, but the cultural center is unique to Martinsburg.

“Since other sites have seen it, they all want a cultural center,” Angell said with a laugh.

To ensure that the center is a gift that keeps on giving, a Resident Life Enrichment Endowment Fund has been established, noted Angell. The campaign, which has a $5 million goal, aims to provide money to cover the costs associated with hosting arts events at the facility. Homewood has contributed $2 million, and another $1.5 million has been raised.

Angell believes the Bice Memorial Chapel and Givler Cultural Center has been a blessing. He recalled a conversation with the daughter of a Homewood resident who attended both ASO concerts at the venue. She informed Angell that despite her mother’s health, the concerts brought her mother great joy.

“We bring life to the residents,” reminded Angell. “Many were involved in the arts. To be able to bring that back to them is a continuation of that.”