Billy Joel made the song Piano Man legendary. Liberace was the ultimate showman with the instrument. And Jerry Lee Lewis took keyboard drama to a new level. Here in Blair County, a collaboration among students, artists, and business owners will have the community looking at pianos in a whole new way.

Pianos in Public – an initiative that celebrates both the performing and visual arts – is launching in the region. 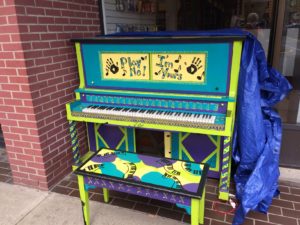 A non-profit group with the mission of bringing pianos into the community, reached out to Altoona Mayor Matt Pacifico last year.

“I thought this could be a good opportunity for Altoona,” he recalled.

Pacifico brought the project concept to ArtsAltoona leaders, who then turned to Pam Snyder Etters, Executive Director of the Altoona Symphony Orchestra and mural artist.

“It fits the profile of the ASO, so I took control of the project,” Etters stated. “The Altoona Symphony Orchestra takes great pride in our efforts to make the arts more accessible within our community. We see outreach programs like this as a great opportunity to engage our region’s youth in a project that can act as a socialization catalyst for local residents.”

The community initiative starts with individuals donating upright pianos for the project. As of mid-January, Etters said more than a dozen have been received.

In the coming weeks, various Blair County elementary schools will each receive one of the instruments. Altoona musician Doctor David Villani will visit the schools that receive pianos, teach students about the instrument, and hopefully inspire them to start playing.

Doctor Villani will leave after his presentation, but the piano at each school will stay. Students (fifth and sixth graders) will then have the opportunity to create a design on the instrument.

“We’re trying to get the students to think of a theme and then build the imagery around that theme – maybe something related to their school, a nursery rhyme, or a place in Blair County,” Etters stated. “I want to make sure the art is recognizable and understandable.”

Etters’ goal is important because the finished products will be featured around town for all to see.

The decorated pianos will debut at a reception following the May ASO concert featuring pianist and arranger Rich Ridenour. Then, Etters added, the instruments will head to their “summer homes.”

Various Blair County businesses and recreational/tourist attractions will have the opportunity to host the decorated pianos for a few months. It is a great opportunity to have a little fun and drive traffic to the locations hosting the instruments. Etters is considering a “passport” for all of the locations once they are determined.

Pacifico is excited about the project. 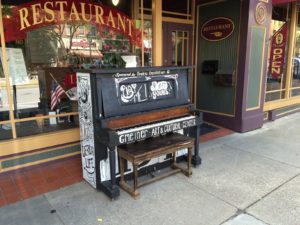 “This would be a great way to get people interacting with the pianos and making music out in public spaces,” he said. “It would encourage others to get engaged to take part in listening or joining in.”

At the end of the summer, there are a few options for the pianos.

“They could be donated back to the schools,” Etters suggested. “If the schools decline, they could remain at the business or cultural site that hosted them. Another option would be to donate them to agencies such as The Healing Patch where they could be used for music therapy or the teen shelter.”

Not all of the pianos donated will be used this year, Etters noted. The others will go to different schools next year for the same opportunity.

“We have enough pianos to go to every elementary school in Blair County,” she surmised.

Similar projects have brought vibrancy to towns around the country, Etters noted, hoping the same can happen in Blair County.

“Art in communities has proven to build bridges over cultural, social, and economic barriers for residents and proves to be a significant draw for out-of-area visitors,” she stressed. “The Symphony is happy to be a leader in these efforts.”