Many people can point to a specific moment or individual that helped them become the person they are today. If you are like me, you have had an army of people and a lifetime of moments to help you along the way.  Today I wanted to share how Charles Churchill, my grandfather, became the reason I pursued an art career. 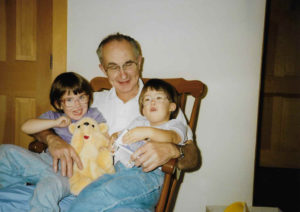 Grandfather Churchill, my sister Aynsley (left), and I (right).

Grandfather Churchill never aged. He was always the same in my mind. Receding hairline, glasses, a watch with fabric straps, neatly dressed, and always ready with his original Chapstick and Wrigley’s Extra gum. Grandfather never had a 9-5 job. He was never at a desk. Leaving in the morning and coming back in the evening was not something he associated with his work. He was always at home doing some sort of project. When I got older, I learned that Grandfather had been largely self-employed his adult life. He would tell me, “If you don’t work, you will die.” Born into a poor family, not working was not an option for Grandfather.

Going to school was tough for Grandfather. He had dyslexia during a time when learning disabilities were not properly understood. Due to family finances and difficulty in school, Grandfather never received a high-school education. I am not even sure if he completed grade school. One thing Grandfather did love though was art. When he was a young man he signed up for correspondence art classes. Through these classes, he was able to learn the basics of form, perspective, and shading. Grandfather continued to draw during his time in the Navy. After he got out of Navy, he found his way to California where he met my grandmother. In California, he began a business flipping houses and making custom cabinets. Later he taught himself how to design houses and draw blueprints using the art skills he had learned. 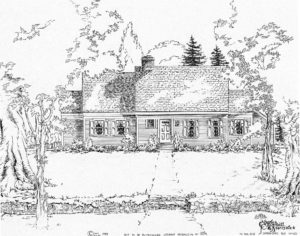 Concept drawing for a set of blueprints.

I distinctly remember my first art lesson with Grandfather. He drew a wooden barrel showing me the various ways to shade the barrel depending on certain lighting situations. For little Kendyl, this first art lesson was not particularly exciting or welcomed. Only when I went to college, did I appreciate this basic lesson in how to create form with shading. Grandfather’s favorite medium to paint with was watercolor. By adding less water to his paints, he was able to have more control and add pigmentation to his watercolors. We would paint landscapes at the kitchen table with our watercolors. I think Bob Ross got “happy little trees” from Grandfather!

Reaching For the Stars

When I started to participate in local art shows, Grandfather Churchill always attended and would be praising and encouraging me to continue my art studies. If he was disappointed that I did not study art in college right away, he never said anything about it. Instead, he supported me in the direction I felt God was taking me. In 2012, Grandfather was diagnosed with lung cancer. Determined to not allow cancer overtake his life, he continued to paint and remodel houses. My last summer with Grandfather Churchill was difficult for me. Even when he was in the hospital, he was more concerned that my sister and I were not upset than he was over his own pain.

The last time I saw Grandfather was when I came to his house to say goodbye before I returned to college. Sitting in a red armchair, he was going through a box of old blueprints, sketches, and art supplies. He has always told me that when he passed I would inherit all his art books and supplies, and that day he reminded me of that again. I pushed the implication of the statement into the back of my mind. I finally said goodbye and that I would seem him during Christmas break. He quietly passed away in October. 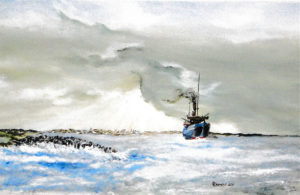 Whenever I am tempted to give up on something, I think of Grandfather. I was able to have a career as an artist that he could only dream about having. Personally, I think Grandfather was a brilliant artist and deserved more credit than he gave himself. I want to be as much a source of encouragement and inspiration to my future students and colleagues as he was to me. Was there someone in your life that greatly impacted you? Let me know in the comments below.