Pandora’s Box and The Writer’s Cycle 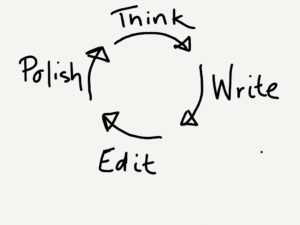 It’s often believed that the most stunning, beautiful things in life take time to create. It’s evident when a painter paints, a sculptor sculps, and particularly when a writer writes.
That’s the moment you know the person who created whatever you’re looking at or admiring, took hours out of their day to do, when they could have been doing something else. This is also the moment when appreciation is gained – whether you’re the one creating or the one on the outside looking in, because you get to step back and see just how much work has been put in.

I’m not shy about how or why I decided to become a writer. I began using a communication board at a young age because I had difficulty expressing myself. I had so many thoughts and feelings locked inside of me for so long. It was like opening Pandora’s Box the first time I typed on that small, illuminated board. I felt such pride and relief to finally be able to bring what had been hidden to the surface.

This continued until I eventually “graduated” to buying and using a standard desktop computer for long-distance communication and work. It quite literally has turned out to be the gift that keeps on giving. Nonetheless, I’m proud that my humble, yet rocky beginnings as a kid growing up in Altoona laid the foundation for my career. My cerebral palsy added another layer of personal importance because I knew everything I did had to come from me, in order to be taken seriously as a writer.

I think it gives me all the more reason to stop and truly look at where I am, and the opportunities that I now have. It would be downright foolish to say I achieved success overnight or that I’ve been handed anything along the way. There was no job offer dangling in front of me, no “pass” because I had a disability and certainly no book deal being granted to me. If I was going to obtain those things, I wanted to do it with my own two hands – whether I was a budding writer from a small railroad town or not.

The biggest misconception I’ve encountered, from non-writers, about having a career as writer – or writing in general – is that it’s “easy.” In truth, this is genuinely one of the most difficult industries to break into because it’s not just about “writing.” It’s about research, fact-checking and most importantly, work. Countless hours of quiet, thankless work – often with no one watching or looking over your shoulder – until that very sublime moment when something you’ve written is accepted for publication and gets sent out into the world.

I try my best to be mindful of the fact that readers rarely get a glimpse of the late nights, the glow of my computer screen on your face or the sigh of relief as I type that last word of that last sentence. They only get to see the final product of whatever I’ve written – primarily if it makes it passed an Editor’s desk.
That’s another reason why I’m proud to be a local writer, because my story might inspire others to set out on their own journey. The fact that I did start my career here in Altoona over ten years ago proves that you don’t have to be “big” to do big things. Nor do you need an advantage. You just need a lot of heart and soul