Between getting sick and adopting the love of my life, my new kitten, Ann Purrkins, the last two weeks have been a whirlwind! Two weeks ago, I had the pleasure of sitting down at Greenbean Coffee Shop with Brandis Ajay and Steve Guice to talk about Altoona Community Theatre’s upcoming production of Romeo and Juliet at the Mishler Theatre. We had a great time talking about the local arts scene, Shakespeare, and the upcoming production. As the Marketing Liaison for ACT’s Romeo and Juliet and a resident blogger for ArtsAltoona, I thought it would be more than appropriate to kick off my series of local theatre show interviews with this show! 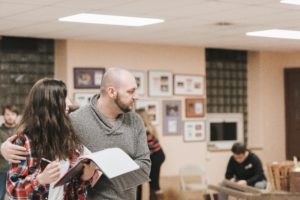 Brandis Ajay is playing Juliet in this production. She is a sophomore at Penn State Altoona and in three choirs with aspirations to be an Opera Singer in the future.

Stephen Guice is the director of this production of Romeo and Juliet and is always working on a show. Steve is starting to direct Exit the King at Cresson Lake Playhouse right after Romeo and Juliet closes.

What is your favorite Shakespeare show and why?

Brandis: “I think Romeo and Juliet is my favorite. I like the story even though it has a really dark ending. For some reason, it has just always sort of appealed to me.”

Why did you want to work on Romeo & Juliet?

Steve: “I’ve done Romeo and Juliet before, but I have been in it before. I’ve always thought there were things that people miss when they do Romeo and Juliet, so I wanted to try to do it right. We learn about it in school, but I think that’s about it. We don’t actually understand it. To me, you have to honor what the text is. And it’s always bothersome to me that you see Romeo and Juliet and it is a love story. People downplay the comedy and they don’t want to honor how raunchy and bawdy the humor really is. And to me, it’s an introduction to so many people to Shakespeare. So when you get the opportunity to see it and the characters are talking about one thing, but the director and the actors don’t feel comfortable enough to actually address it, that’s when the audience is sitting there saying, “I don’t understand this.” That’s why we give this false impression that you can’t understand Shakespeare. For me it was that and it was also that I felt I had an understanding of how to cap the material, make it relevant, and make it exciting not only for modern audiences, but for youth and adolescents. And of course to work on the themes of abuse, women’s issues, and suicide. I think those are important.”

Brandis: “Like I said, I’ve always enjoyed Romeo and Juliet ever since I first read it back in my freshman year of high school. But, the main thing for me was that I knew it would be a difficult role to play if I got cast and I always like a challenge. In everything I do I always push myself and I knew I would grow from it as an actor. I am actually not really that experienced when it comes to acting. I want to pursue it hopefully. So I knew I would grow as a performer by doing this. It all worked out I guess!”

What are some of the challenges of working on a Shakespeare production? 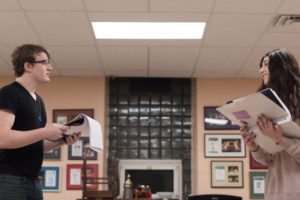 Brandis: “At first, I thought the hardest part was going to be understanding the language and it was difficult to understand at first. Now that I have worked with it for a couple of months, I think I understand most of it. It’s almost like I have to translate it in my brain, but I do understand what I am speaking. So that is what I think the hardest part was at first, but now it’s just random things like staying totally still when I am supposed to be dead or actually dead. That’s the hard part! It’s really difficult.”

Steve: “One of the most challenging things for me was just casting. I mean you’ve got to get the right people. We got very lucky. Particularly, Brandis does an exceptional, lovely job. Ryen is doing a very, very good job [as Romeo]. I think everybody’s work is falling into figuring out Shakespeare. When you start performing, your brain has to learn a foreign language it would seem. What’s interesting is the audience can pick up on the foreign language within just a few minutes. But for the actors, they have to understand on a deeper level so that it becomes accessible to the audience. That’s what it is; helping guide the actors to play the emotion of the text. That’s the big one, casting and finding the right people that can work in an abstract way like learning the language and how to work the text.”

Brandis: “There is something I want to add to that. I’m primarily a singer. I sing a lot of stuff in foreign languages. If there is one thing I have learned in this past year, it’s that if you truly know what you are saying or singing, then your audience is going to know exactly what it is. Even though they can’t understand it completely, they’re still going to get it because you truly feel what you are saying or singing.”

How is this production of Romeo & Juliet different than others?

Brandis: “There are a lot of modern aspects in this production. I think when most people think about Romeo and Juliet, they think of the Renaissance Era. There is a little bit of renaissance in it, but there is other stuff. There is a lot of music in it and that is something that I wasn’t expecting getting into it, but I love it! It’s really awesome and I think everybody else is going to love it too.”

Steve: “Shakespeare loved dichotomy. He adored that and he’s written a piece that really highlights that. We’ve broken the show in half, because we are not doing five acts, we are only doing two. The way we’ve cut it, the first act is a comedy and the second act is when the mood completely changes. The first half follows the men and the second half follows primarily Juliet. The first half we are with the boys in the show and they are loud and obnoxious and the music is loud, fun, exciting, and modern. Then the second half, we sort of slow it down and it becomes melancholy. All of the music is sung by all female vocalists in the second half. The lighting, the mood, everything changes in the second act. We sort of blend time periods together in interesting ways. People still curtsy to their elders and yet Juliet has a record player on her night stand. It’s fun but completely different. I’ve never seen a production of Romeo and Juliet done the way we’re doing it.”

Two weeks ago, the show was blocked and the cast was getting off book. This past Saturday was load-in for Romeo and Juliet! Load-in is when the set and props are brought over from the rehearsal space to the Mishler Theatre. Ann Purrkins and I visited during the cast and crew’s lunch break and popped over to see the set! Both Brandis and Steve pet Ann before heading back to do more set construction! It warmed my heart. I am so excited to see the final production of Romeo and Juliet! I will have to fill in Ann afterwards.

Be on the lookout for my next blog about Iron Bridge Theatre Company’s Stretchmarks, featuring ArtsAltoona’s very own Stephenie Schroth! If you have a local theatre production coming up and would like coverage, please email me to set up an interview at eevey@artsaltoona.org! I am hoping to write one blog post for each show in local theatre companies’ seasons.