When I wanted to start a series of artist interviews, I wasn’t quite sure who to interview first. This past Friday, I had a brilliant and rather obvious idea. I would interview my good friend Russell O’Reilly! I met Russell about a year ago when I was working in the Altoona Mirror building. He is a native of Johnstown and studied journalism at the University of Pittsburgh. Russell writes education articles for the Altoona Mirror. 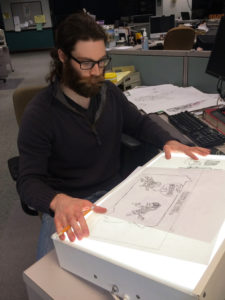 During the time Russell and I worked in the same building, I learned that he isn’t just a writer. He is also a pretty fantastic artist as well! Thankfully he agreed to be interviewed and give me some tips for future interviews. Here is what I learned about Russell:

What is your medium of choice?

Russell describes himself as more of a hobbyist than an artist. He is still experimenting but really likes working with acrylics. “You can’t really make a mistake, you can paint over anything, and to me, it’s really easy to work with.”

What inspires and influences your work?

When Russell was a kid he was captivated by things he saw in nature, animals, and people’s faces. As he grew older those things continued to inspire him. Russell interprets what he sees as an “invitation to reflect on the beautiful things in the world” and that inspires him to share that invitation with other people through his art.

How would you describe your style?

Currently, Russell describes his style as “loose and haphazard.” He can get bored of a style after a while so he is always changing and doing something different. Sometimes Russell uses brushes and pallet knives to paint. Lately, he has been pouring the acrylics directly onto the canvas. 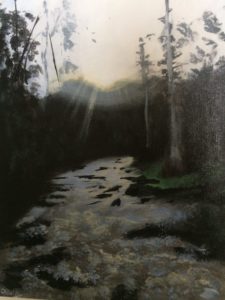 When did you first become involved in art and why?

As a child, Russell would try to copy things he saw in books. He doesn’t know why but he always liked drawing. “It feels like it [art] has always been there.”

Do you have any favorite artist and why?

Russell doesn’t have a favorite artist, but he likes variety. “I like to pick different things out of other people’s styles.” He takes a little bit from the artists he follows on Instagram and the painters of the past.

What message do you want your art to convey?

For Russell, the message is the most important part of his art. While he may not have had formal art training the message of his art will always be there. “Because beauty inspires me to believe in a higher purpose, or at least invites me to do that, at this point I’m just trying to also extend that same invitation I see through studying what’s around me to other people.”

What is your most important tool? Something you can’t live without in your studio?

“Well I don’t have a studio, so probably newspapers so that I don’t spill and ruin the floor in my apartment!”

Tell me about a current project you are working on. 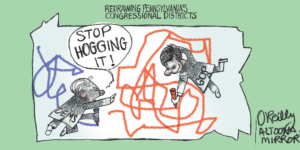 A recent editorial cartoon by Russell.

Recently Russell started drawing editorial cartoons for the Altoona Mirror opinion page. He is teaching himself how to use Photoshop to give his cartoons vivid colors. “Its really fun drawing caricatures of people, especially figures in the community.”

What is something everyone can learn from the art?

Russell believes that people will learn a lot about themselves through the creation of their art.

What are your plans for the future as an artist?

“I’m illustrating a kid’s book and I have high hopes for that.” As he gains more confidence in his ability, Russell would like to show his work publicly. “I still have a lot of blank canvases in my apartment that I need to get painted. Then once that happens, I’m going to find avenues to show them.”

I hope everyone enjoyed my first Artist to Artist interview. I am excited to continue this series and meet other amazing and talented individuals.  If you would like to get in touch with Russell O’Reilly about his art, email him at ruo2222@gmail.com.