The Art of Love

Not sure why but it seems to me that creative people are more emotional. Maybe they are more emotional because they tend to use the right side of their brains. As it is Valentines Day week, I wanted to share some artists, musicians, and writers who expressed the emotion of love in their work. 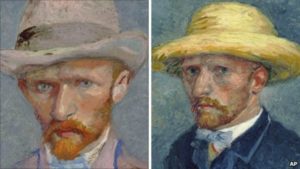 Painting of Theo and himself by Vincent.

Vincent van Gogh could be the poster child for the troubled artist. He was depressed, unable to sell paintings, and a failure at any romantic relationship. The only person who truly loved and cared for Vincent was his younger brother Theo. It was Theo who encouraged Vincent to become an artist. Over the years Vincent and Theo would exchange hundreds of letters. In a letter to Theo, Vincent stated, “I don’t really have any friends except for you, and when I’m ill you’re always in my thoughts.” After Vincent’s tragic suicide, Theo kept all of his brother’s paintings and letters. Six months later Theo also died. They are buried side by side, a final token of brotherly love. 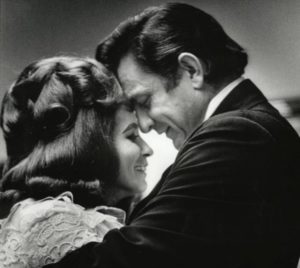 Ask any music fan who they feel the greatest country music couple is and their answer will probably be Johnny and June Cash.  Both Johnny and June where successful solo artists and songwriters. Elvis Presley is credited with introducing June to Johnny Cash and his music. June described falling in love with John “like I’m in a ring of fire, and I’m never coming out.” Her song “Ring of Fire” describes those very same feelings. But June was not quick to say yes to John’s proposals of marriage. During a concert in 1968, Johnny finally forced June to give him an answer by proposing to her on the stage. She said yes and one of the greatest musical duos was created. While their marriage was not always perfect, Johnny and June were devoted to each other.  Johnny was devoted to June and credited her with his success. They were married for 38 years Johnny dying six months after June.

Perhaps you recall the poetry lines “How do I love thee? Let me count the ways.” Elizabeth Barrett Browning wrote those lines and more about her relationship with her husband in her book Sonnets from the Portuguese. Robert had long been an admirer of Elizabeth, a successful poet who lived under her father’s harsh rule. After he met Elizabeth in 1845, they began writing hundreds of letters to each other. A year later they eloped much to the disapproval of Elizabeth’s family. The Brownings would live in Italy for 15 years and had one son together. During their marriage, Robert didn’t share the same popularity as his wife did. Today his collection of poems Men and Women, inspired and dedicated to Elizabeth, is considered one of his best works. 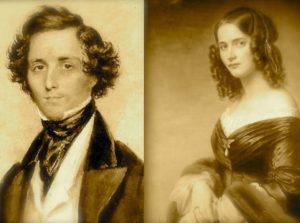 If you have ever been to a wedding and they played a loud organ march then you probably heard Felix Mendelssohn’s Wedding March. Felix Mendelssohn was a German composer, conductor, and organists. He also was an accomplished artist. Mendelssohn described his first meeting with his future wife Cecile like this, “I’ve met a woman with the most bewitching deep blue eyes.” His growing love for Cecile is reflected in his piano solo “Duet Without Words.” Felix and Cecile were married in 1837 and had five children. Cecile, also a talented musician, supported her husband until his death in 1847.

When doing research for this article consistently the top artist love story was that of Freda Kahlo and Diego Rivera. In his book My Art, My Life: An Autobiography, Rivera recounts first meeting Kahlo at her high school where he was painting his mural “Creation”. When Kahlo was 18, she reconnected with Rivera and the began a passionate affair although Rivera was still married. In 1929, a now-divorced Rivera and Kahlo were married. Their marriage was anything but traditional. They lived in separate houses and had numerous open affairs. Kahlo divorced Rivera in 1939 but remarried him the following year. Despite their turbulent relationship both Kahlo and Rivera would claim each other as the love of their life. Their second marriage would last until Kahlo’s death.

In today’s article, I have given you five brief examples of talented people and the love of their lives. It is sad to say that many famous creative people have tragic love stories. Personally, I believe their experience in love helped them to be great artists, writers, and musicians. Do you have a favorite creative couple? Let me know in the comments below!