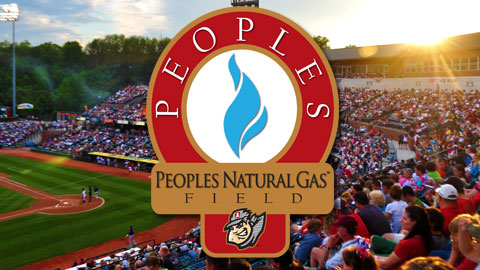 Two weekends ago, I had the pleasure of adjudicating and teaching a workshop at the 11th Annual North Eastern Theatre Festival in Bel Air, Maryland. This was my first time at NETFest so I wasn’t sure what to expect. As a teaching artist, I have taught at a few conferences and festivals in the last few years. By far, North Eastern Theatre Festival is the most organized and most fun for students and adults that I have attended so far. Throughout the festival, there were one hour performances from each high school, adjudication sessions for monologues and musical theatre songs, and a variety of workshops available. Depending on the time slot, students got to choose what five different workshops or adjudications they would attend throughout the festival. 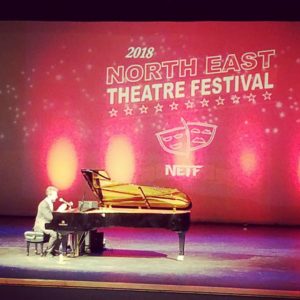 For me, the first day included monologue adjudication and a performance by Jason Robert Brown. To remain objective, I will only be writing about my experience and not citing specific schools’ or student’s work. If you are not familiar with theatre performance adjudication, adjudication is the process of analyzing a performance based on a set of criteria on a rubric. Different festivals have their own performance rubrics. In general, all the rubrics have similar aspects that they judge for each performance during the  adjudication period: familiarity of text, text selection, vocal quality, physicality, use of space, character, objective, overall performance, and things to improve on. To learn more about perfecting your monologue, be on the lookout for my next blog post, 7 Tips to take your Monologue to the Next Level. The point of adjudication in this instance was to finesse monologues for auditioning. Having a repertoire of monologues is useful for auditioning for shows that ask you to bring your own monologues and for theatre departments, conservatories, acting troupes, or theatre companies that require auditions for admittance or membership. The high school students I worked with on day one brought monologues from short stories, Julius Caesar, Little Shop of Horrors, The Diary of Anne Frank, and V for Vendetta to name a few. I appreciated the hard work and thoughtfulness students put into their monologue choices.

After adjudication sessions and dinner, we had the pleasure of seeing Jason Robert Brown in concert. He opened the concert with Hope, a piece that he wrote the morning of the 2016 election results from his upcoming album. Jason Robert Brown is a musical theatre writer and song composer who is most famous for his musicals The Last Five Years and Songs for a New World. He played and spoke for an hour and a half. A lot of his music has a sense of humor and inspirations from his Jewish heritage. His public speaking style was very similar: whimsical with jokes about his younger self, his Jewish upbringing, and Republicans. At one moment, he stopped playing his Yamaha piano to take a drink from a bottle of water. He then confessed to the audience that this was his first time performing since getting over the flu and that the fear of messing up lyrics or a performance is something that lingers no matter how many years you have been performing! It was a great performance and the high school students loved every second. 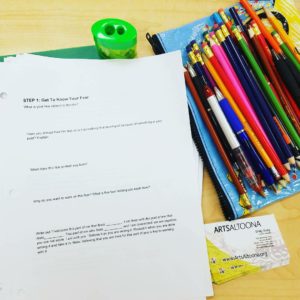 My set up for the Theatraphobia

On the second day, I continued monologue adjudication, got to see some high school productions, and teach my own workshop, Theatraphobia. As someone who strives to face my fears related to theatre regularly, I thought it would be appropriate to create a theatre workshop that teaches students how to face their fears. During the workshop, each student identified a fear related to theatre, created steps to slowly face that fear, made a timeline to face it, and made a list of people that could help support them along the way. I explained to my students that by teaching this class, I was working towards my fear of finishing a play and applied theatre program that I have been working on for the last two years. Fears of performing due to speech impediments, falling on stage, writing a playscript, and not becoming a professional actor were just a few of the fears the students brought to the table. I played the Greatest Showman soundtrack upon their request and handed out packets for them to map out their fears and their plans to face them. I was fortunate enough to have one on one time with each student during the 45 minute workshop and helped coach them through the worksheets. If you are interested in working through a theatre related phobia, please feel free to message me and I can set up a local workshop or one-on-one meeting! Overall, I had a great experience at NETFest and I look forward to submitting a workshop proposal next year!