In an exchange between Clairee Belcher and Ouiser Boudreaux, the gentile Clairee advised the crotchety, closed-minded Ouiser to expose herself to more culture.

“I don’t see plays because I can nap at home for free!,” Ouiser shot back.

So goes one of the memorable lines from Steel Magnolias – a popular 1980s movie adapted from Robert Harling’s play earlier in the decade. 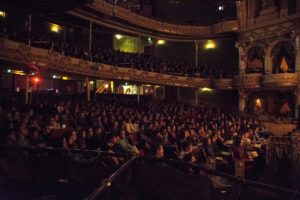 A sold out crowd during an ACT production

Altoona Community Theatre will undoubtedly keep the audience awake and entertained as it stages the charming production this fall.

In November, ACT will present the Stephen Sondheim musical A Little Night Music, which originally appeared on Broadway in 1973.

Peter and the Starcatcher – the story of how Peter Pan came to be – will be the February show.

As for the May 2019 ACT production: stay tuned, Helsel advised.

“We’re still working on that,” he said. “We’re trying to obtain the rights for a recent Broadway hit that’s just becoming available.”

As local theatre devotees applaud the upcoming season, one may wonder how ACT determines which plays will grace the historic Mishler Theatre stage.

The process, noted Helsel, begins early each calendar year with a seven-member artistic committee looking at shows that might be a good fit. The group considers input from other ACT members and season subscribers.

The committee presents a slate of four potential productions and four alternates. The general membership of ACT then votes on the entire slate, and the Board of Directors gives final approval.

“They look for a balance of comedies, dramas, musicals,” Helsel pointed out. “They try to vary it from year to year so there’s always a mix of things we’re presenting. They also try to take into consideration whether or not (shows) will sell, but they also need to keep in mind what kind of shows our members are going to want to produce. There may be a show that everyone wants to see, but if no one is going to audition for it, there’s a problem.”

Securing the performance rights is the next step, pointed out Helsel. If ACT is unable to secure the rights for a particular show, the theatre will then turn to one of the alternates.

Directors for each production are then chosen. He or she is responsible for the artistic vision of a show, while the producer or production manager handles administrative matters such as making sure a staff is in place and the budget is followed.

“A musical has a bigger budget because royalties are more expensive and we pay the orchestra because we use professional musicians,” he added.

Directors receive a stipend, but actors and the technical crew are volunteers, Helsel noted.

Auditions for the September show usually begin at the end of July, with rehearsals starting in August.

“It’s a major commitment,” he reminded. “Rehearsals are usually five to six nights per week.”