One of the greatest heartaches in life is battling Alzheimer’s or witnessing a loved one’s decline from the disease. The remarkable stories of those touched by the debilitating condition have inspired a work that celebrates the power of music.

The Blair Concert Chorale will perform Alzheimer’s Stories by Robert S. Cohen and Herschel Garfein on April 14 at 7:30 p.m. at Saint John the Evangelist Church in the Lakemont section of Altoona. The concert will close the Chorale’s 2017-2018 season. 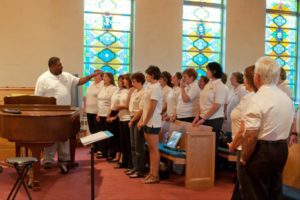 According to Jane Gable, BCC Operations Manager, the oratorio has roots in the Susquehanna Valley Chorale of Lewisburg, Pennsylvania.

“I think the local connection is especially interesting,” she noted.

A chorus member who lost both parents to Alzheimer’s wanted to fund a musical that would highlight the impact the disease has on patients and their caregivers.

Alzheimer’s Stories is in three movements: “The Numbers” (how many people are affected by Alzheimer’s), “The Stories” (a compilation of anecdotes about the disease), and “For the Caregivers” (advice for those who care for Alzheimer’s patients).

“Sitting in on rehearsals for parts of Alzheimer’s Stories, I’m fascinated by the concept of a modern oratorio and find the music to be hauntingly beautiful,” Gable mentioned.

Steve Helsel, President of the BCC Board of Directors, believes the concert demonstrates the artistic director’s vision to have the Chorale perform works beyond the classic repertoire.

“Since taking over our conducting baton, Ryan Beeken has introduced our singers and our audiences to contemporary pieces that not only are musically challenging, but also bring a great social consciousness to our concerts,” Helsel stated. “Two years ago, he led us to The Armed Man, which was about the consequences of war set within extracts from the Christian mass.  This year, Alzheimer’s Stories is a modern oratorio illuminating a disease that surely touches the lives of everyone, be it family members, friends or acquaintances.”

Equally powerful, the concert opens with #twitterlieder, a composition by Charles Anthony Silvestri and James Eaken.  The music light-heartedly chronicles a person’s life from youth to old age through 15 “tweets” limited to 140 characters each.

#twitterlieder is in three acts: Youth, Middle Age, and Old Age, noted Gable. At the end of each act, an unaccompanied “Greek Chorus” comments on the previous life events.

For ticket information for the April 14 concert, please visit the BCC website.