What is Arts Advocacy Day? 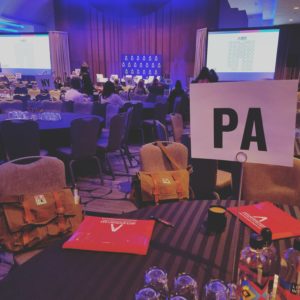 ArtsAltoona Bags at a Pennsylvania Table at Arts Advocacy Day 2018

Arts Advocacy Day is a two-day event hosted by Americans for the Arts in Washington D.C. which advises arts advocates from across the U.S. how to meet with national legislators to discuss the importance of public policies and increased public funding for the arts. This year, it took place March 12th and 13th, and I was lucky enough to represent ArtsAltoona while attending!

On March 21st, shortly after my time on the Hill, Congress rejected the proposal to terminate the nation’s cultural agencies and instead increased funding for the National Endowment for the Arts (NEA) and National Endowment for the Humanities (NEH)! It was a small victory that proved that my voice could really make a difference. It was an amazing experience to say the least. 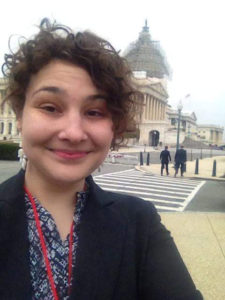 Emily at Arts Advocacy Day 2015 as an Intern

Why Did I Want to Go?

I wanted to go to Arts Advocacy because having access to the arts in Blair County has been integral to my life experience. I went once before in 2015 as an intern for Wolf Trap Foundation for the Performing Arts and found it very informational and a great opportunity for networking. I would not be the person I am today without a thriving arts community in Blair County and access to the arts through my education. I believe people greatly benefit from access to the arts and that artists should be supported in their career choices. Art drives better grades in classrooms and a stronger economy. I believe it is time to break the stereotype of the starving artist and recognize what art does for individuals and communities. Representing friends and constituents at Arts Advocacy Day is a great way to start breaking that stereotype and be a better citizen.

What I Learned and Brought Back to Blair County 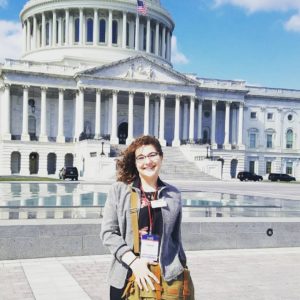 Emily at the Hill for Arts Advocacy Day 2018

When I spoke to Bill Shuster’s staffer, Libby Callaway, I brought up the importance of the CREATE Act for his constituents. The Comprehensive Resources for Entrepreneurs in the Arts to Transform the Economy (CREATE) Act is a piece of legislation that aims to make changes in federal programming that acknowledge the arts as an influential part of our economy. For example, FEMA currently only helps to replace tools lost in natural disasters for artists employed by businesses. However, a lot of artists in Altoona aren’t business owners and are self-employed. Artists who are heavily involved in the community who work out of their own studios or homes and not through a business would not have their tools replaced in a natural disaster. Most of our teaching artists for ArtsAltoona’s After-School Arts Program (ASAP) would also not be covered under the current legislation.

There are 4.9 million arts jobs in America. According to DataArts, arts organizations in U.S. House District 9 (which covers all of Bedford, Blair, Fayette, Franklin, Fulton, and Indiana counties and part of Cambria and Greene counties) spent over $4 million paying for over 1,300 jobs in 2010. That $4 million dollars plus an additional $4 million dollars the arts organizations spend on other expenses like rent, etc., benefits our district’s economy. There are a lot of self-employed artists and arts organizations in Blair County that make a difference in our economy and it is important to have legislation that continues to support them.

ArtsAltoona aims to continue the growth of our economy by hiring people, like me,  who care about the community and the arts. A lot of young professionals who aspire to be in the arts leave the area to pursue a career. ArtsAltoona hopes to support local artists and arts organizations and attract more people to the area to be patrons of the arts. I believe in our community and the accessibility of the arts and so does ArtsAltoona. I hope that what ArtsAltoona has started will continue to grow and help the arts flourish in our community.