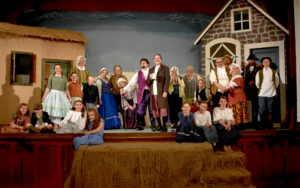 Tonight is opening night for Saint Luke’s Episcopal Church’s production of Rip Van Winkle! I took some time this week to interview Woody Pyeatt, David Wirick, and Bernhard Warg about the production. I have worked closely with all three of these men on several Altoona Community Theatre shows, mainly in The Man Who Shot Liberty Valance as Hallie Jackson and with administrative work during Woody’s Altoona directorial debut of It’s A Wonderful Life. Rip Van Winkle and Saint Luke’s have quite a history that I was personally unfamiliar with and I bet a lot of my readers might not be familiar with it either!

David Wirick who plays Rip Van Winkle in this production has been involved in the community theatre scene since 1999. He’s played a variety of often comedic roles with Altoona Community Theatre, Things Unseen Theatre Company, McGarvey’s Dinner Theatre, and Cresson Lake Playhouse. He’s retired from the drug & alcohol counseling profession as well as ordained ministry and resides here in Altoona with his husband, Yoseph.

E. Bernhard Warg’s roles include Clarence in It’s a Wonderful Life at the Mishler and Father in Eurydice at Penn State Altoona, which garnered him an Irene Ryan nomination. He is playing Derrick von Beekman, the villain character in this production!  His feature films include Guilt & Sentence (2010) and Southpaw (2015). He is currently participating in VEDA (“Vlog Every Day in April”) on his YouTube channel.

The director of this show Woody Pyeatt  and his wife, Marilyn, moved to Central Pennsylvania from their longtime home in Texas a little over a year ago. Most recently, he directed It’s A Wonderful Life at Altoona Community Theatre.  Woody has directed about 100 shows of all sorts, including comedies, dramas, musicals and revues in academic, community and professional theatres. Woody also has worked extensively in the theatre supply industry, selling, specifying and installing rigging, lighting, sound and video systems, as well as stage curtains.

Tell me more about St. Luke’s! I have yet to see a show there. 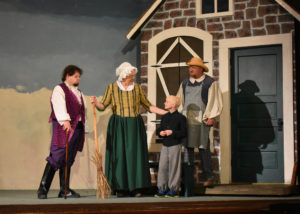 Woody: “St. Luke’s was founded in 1856, about the time this play was written, and has been a mainstay of the Altoona community ever since. This is not, by any means, the first play performed here. In addition to church plays over the years, Altoona Community Theatre performed here for a time when the Mishler was being renovated.”

David: “This is probably the first benefit theatrical performance to assist this parish to maintain a multitude of good works its members provide for the community of Altoona. Most of the actors are not members of the parish, so we’re doing this as a way of supporting our brothers and sisters of faith and nurturing some positive energy in the region through our little show.”

Bernhard: “The stage hasn’t been used for quite some time, and it had been used for storage, so this is the first play I’ve ever done that started with a “Load-Out!”*** I also took the initiative (I suppose it’s my Assistant Stage Manager training from Penn State) to clean up and put glow tape on the backstage steps.”

***If you are not familiar with the term “load-in,” a load-in is when the cast and crew of a production move their set, costumes, and props from their rehearsal space over to the theatre. Bernhard’s joke about a “loud-out” means that the cast and crew of Rip Van Winkle had to clear off the stage before they could load-in!

Why did you want to be involved with this show? 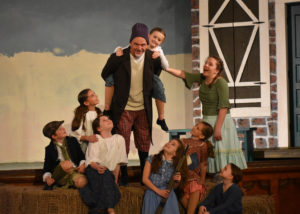 Woody: “I love directing, and I love this show because it is a piece of classic Americana. I am on the Advisory Board for St. Luke’s, and we were discussing fundraisers, so Marilyn Pyeatt and I decided to put our talents to use in this way.”

Bernhard: “I love acting, and I had a lot of fun working with Woody (and many of the same actors) in It’s a Wonderful Life at the Mishler.

David: “Bringing a character to life, so to speak, is always a wonderful challenge. I was asked by Woody to audition. I’ve been on various stages in Blair County since 1999 and enjoy the challenge of learning the role and certainly always hope the audience will respond emotionally with the story presented by my character. Comedic roles have always been simply fun for me as well. With this old Washington Irving ‘folk tale’, it’s a bit like blowing the dust off of an old childhood story book. I do some research but am focused more on the current interpretation of the tale and the director’s guidance. Folks are familiar with the basic story line, but for many of the audience it will feel like a new experience.”

Does this play differ from the short story?

Woody: “It was adapted in the 1850s to be a showpiece for Joseph Jefferson, one of the most famous actors of that period, and the story was adapted to fit the audiences’ expectations of the day for classic melodrama. One of those expectations was that there would be music to enhance the performance throughout the play and musical interludes during scene changes, and we are following that tradition as well. Jefferson played this script hundreds, if not thousands, of times across the English-speaking world. We know he performed in Altoona and believe he did this show, but we haven’t had a chance to do the research to prove he played Rip here.”

Bernhard: “My character isn’t even in the original story, so it doesn’t really affect my process as an actor.”

What themes will Blair County audience members take away from this show?

Woody: “Some of the themes in the show are timeless, and the people of Blair County can certainly relate to the challenges shown of living in poverty, dealing with domestic strife, and the need to maintain love, generosity, and good humor.”

David: “Rip’s a reflection of some Old World and Old Time understanding of the relationship between husband and wife. He’s also a ‘chronic drinker’, sort of the town drunk, but beloved by most of his village. He reminds me a bit of the character Otis in the Andy Griffith Show. So there are themes about home values, about forgiveness, and about familial love despite everyone’s character defects. It’s not a ‘deep’ show. It has an emotional vein I hope the audience will appreciate despite the not very politically correct portrayal of a family affected by alcohol. It was written in the 1800’s and one must keep that in mind throughout.”

Bernhard: “There are themes of family and forgiveness, and also darker themes of spousal abuse and alcoholism. I just hope people will be entertained!”

What creative challenges did you have with the show?

Bernhard: “Because the church is used for multiple activities by various groups, there were a lot of nights when we were unable to rehearse. It’s amazing how much you can forget when you skip a day or two!”

David: “Always memorizing the lines, but with a bit of an affected Dutch German accent with phrasing that is antique and often backwards from the way we would normally speak nowadays. I think I was challenged a bit by the need to divorce myself from modern political correctness in order to give Rip his due.”
Woody: “The space is small and not really equipped for theatre in the modern sense. For example, the actors have to navigate stairs through the bowels of the building to get backstage, and we have had to set up dressing areas for men and women on different floors. Certainly, some of the actors have had difficulty with the archaic language in the play. That said, we feel all the challenges have been dealt with quite well.”

This sounds like it is going to be a great production in a unique space that will give back to the community! And that is exactly what Altoona needs more of. Break legs cast and crew!
If you would like to attend, tickets can be purchased in advance at Thompson Pharmacy on Chestnut in Altoona, as well as the location in Hollidaysburg. On show days, tickets can be purchased at the Parish Hall for an hour before the performances: starting at 6:30pm on Friday and Saturday nights, and at 1:00 pm on Sunday. Performances are at 7:30 pm on Friday and Saturday, and 2:00 pm on Sunday, in the church auditorium. Enter off 8th Avenue for tickets and the show; a handicapped entrance is available off the ramp on 13th Street.