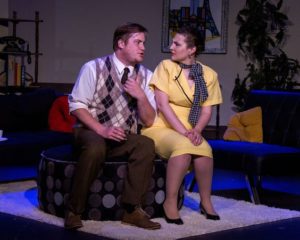 Zack and me in Boeing Boeing at The Church in the Middle of the Block. August 2017. Photo Credit: Glenn Davis

This weekend at the Church in the Middle of the Block, do not miss the opening of RUST by F.J. Hartland by Things Unseen Theatre Company. Being a good friend of Zack Scholl (who plays Pavol Strnad in RUST) and as an aspiring playwright myself, I was anxious to hear about this production! Zack and I were actually in Boeing Boeing last summer for Things Unseen. In fact, Zack and I went with friends to see Hartland’s production of Cheat Sheets at Cresson Lake Playhouse last year because the cast and crew of Cheat Sheets came to see our production of Boeing Boeing! Here is a synopsis of RUST from Hartland:

“RUST takes place in a mill town in the early 1980’s.  Marek, who has worked in the mill all his life and supports a family, is thrown into turmoil when the mill closes.  The closing affects everyone in the family as they struggle to deal with all the changes in their lives.”

Seeing as this production is being directed by the playwright who wrote it, I had different questions for Zack and F.J.

As a playwright,  F.J. Hartland holds the record for the most productions in the Pittsburgh New Works festival at 16–with four wins as “Best Play.”  As a stage director, he has over 100 productions to his credit.  He has been a member of Actors Equity Association (the professional actors union) since 1991.  Currently, he is the Assistant Professor of Theatre at Saint Francis University.

What is your process for writing a playscript? 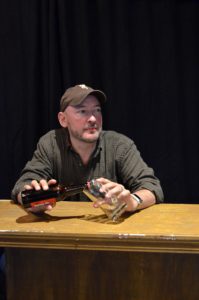 What inspired you to write RUST?

F.J.: “Some people forget how bad things were in Western PA in the 1980’s.  Some young people don’t even know that it happened.  My father, who worked for Bethlehem Steel from the time I was a baby, was put out of work.  The company where my mother was the executive secretary went bankrupt, and she was out of work.  I lost my job in Pittsburgh in 1983 and stood on the unemployment line. Those were tough times.   I think what I took away from that is what my parents taught me about working hard–and that there is dignity in any kind of honest work.”

What are some challenges of directing work that you have written?

Zack Scholl is a newcomer to community theater who has officially caught the bug! He has appeared in Boeing Boeing and Bengal Tiger at the Baghdad Zoo with Things Unseen Theatre and It’s a Wonderful Life with Altoona Community Theatre. He looks forward to working on more productions on stage and backstage in the future. 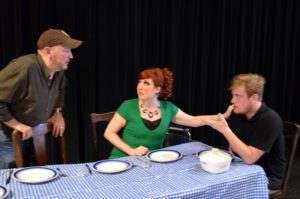 Why did you want to work on this show?

Zack: “I love participating in community theatre and wanted as little down time as possible after my last show ended, so when the opportunity was presented to me to act in RUST, I couldn’t turn it down.”

What are some challenges in acting a newer playscript? Acting for the playwright?

Zack: “Having the playwright as a director hasn’t presented as many challenges as it has provided benefits, to be honest. F.J.’s direction and insight into the motivations of the characters is wonderful!”

Who is your character and what do they struggle with through out the production?

Zack: “I play Pavol Strnad in this production. Pavol is a college student who returns home to try to convince his family to allow him to drop out of school to work in order to help the family through their financial downturn. After he’s discouraged from dropping out of school, he returns home again to deliver news that he was filmed, on his college campus, delivering a speech at a gay rights rally. He then has to come out to his parents before he’s publicly outed by everyone in his hometown. His father, Marek, immediately kicks him out of their house, and Pavol is beaten by two homophobes on his way to the bus station. After the attack, Marek is confronted with the unsettling fact that, if it hadn’t been his son, he may have been one of the men throwing the punches. Pavol talks through his sexuality with both of his parents, who ultimately come to love and respect him, even though they struggle to understand his orientation completely. First and foremost, the Strnads are a family that love one another.”

What are some themes this show grapples with that will intrigue Blair County audiences?

Zack: “The show deals with steel mills closing, a family falling on hard times, and a family member whose sexual orientation makes his parents uncomfortable, and between these themes, I feel like every member of the audience that comes to see RUST will have either been touched by one of these experiences personally, or will know someone who has.”

Between the Blair County Arts Festival this coming weekend and Exit The King coming up at Cresson Lake Playhouse (I am the Director’s Apprentice), I will be anxious to squeeze a show in between my busy schedule to support my buddy, Zack. I would make a joke about my cat Ann’s interest in this play, but she is afraid of Zack! Considering that, I am unsure how she would feel about this production. At least I think it will be interesting and important to the community! That’s what matters, right?

Admission is $10 for students, seniors, and military and $12 for general admission. You can get tickets at the door or at Thompson Pharmacy in Altoona.