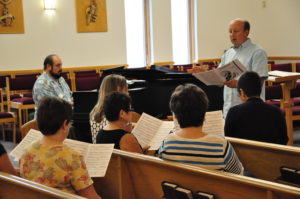 Those interested in honing their skills in the art of choral singing are invited to participate in three evenings of development sessions. Participants will learn techniques including breathing, posture, pronunciation, phrasing, and dynamics.

“The Academy of Sacred Music exists to promote sharing, scholarship, and skill development in the field of sacred music through ongoing formation of musicians from all religious traditions,” Long noted. “The Choral Institute presents music from the great religious traditions in an effort to promote understanding and appreciation among people from varied faith traditions and cultures.”

The development sessions will be held on June 18, 19, and 20 at Saint John the Evangelist Catholic Church in the Lakemont section of Altoona.

An optional pre-Institute development session will be held on the morning of June 2, also at Saint John the Evangelist.

The Academy of Sacred Music Board of Directors created a budget that allowed the organization to reduce the registration cost to $25 per person, stated Board President Chris Ringkamp. Scholarships are available for participants in need.

“This is a refreshing, short-term experience for singers of all skill levels who enjoy sacred choral music,” added Ringkamp.

The community is invited to the Academy’s public performance on June 21 at 7:00 p.m., also at Saint John the Evangelist. Soloists will include Julie Hanlon, soprano, and James White, bass-baritone. Asa Carns will accompany the group on piano and organ.

A free-will offering at the concert will allow the Academy to award voice and instrumental scholarships to junior and senior high school students throughout Blair County.

This year’s public concert is a homecoming of sorts.

“We thoroughly enjoyed taking our last five concerts to the Central Pennsylvania Festival of the Arts in State College, but we are eager to bring our concert back to Blair County,” Ringkamp said.

As a singer, Long has recorded two independent solo releases. His cover recordings of We Can Be Kind and Blessings can be found on iTunes, Apple Music, Spotify, and YouTube.

Although his music has led him to exciting venues around the world, Long looks forward to his upcoming visit to Blair County.

“The best part of the Choral Institute for me is spending time with friends and family making music at home,” he said.