May Letter from the Board

What a month is has been for ArtsAltoona! 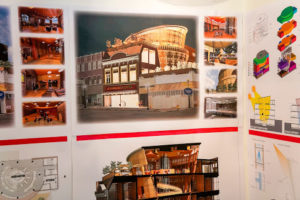 A concept created by one of the student architectural teams.

The fourth year Architectural students from Penn State at University Park gave their final presentations to our ArtsAltoona team during a reception held in their honor at the Altoona Heritage Discovery Center on April 26th.  Nine teams of students showed off their three dimensional models and posters with drawings of their final concepts for converting the former Kress Building into the ArtsAltoona Studio Arts Center. Comments like “Awesome,” “Amazing,” and “Fantastic” were heard from the audience in response!  Some of the students allowed us to put their models on display at stART here and at the LaunchBox for a while.  We have the posters available for viewing.  Thanks go to all involved with this project!  We will soon be working with a local architect to review the students’ concepts and to draft plans for the development of a financially feasible and sustainable building.  What do you think should be included? 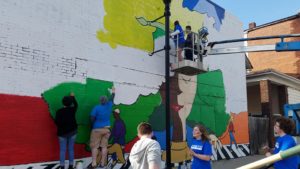 The crowd at stART here helping to paint the mural!

On the heels of the Reveal, we hosted an event on the main street through Juniata on Saturday, April 28th.  It was a neighborhood block party with lots of music, art and food!  Key organizers from ArtsAltoona were our Events Director, Rue Moyer, Program Director, Gwen Fisher and volunteer marketing guru, Shasta Langenbacher.  We had the great privilege of being selected by the sophomore class of Sheetz Fellows of Penn State Altoona for stART here to be their class project.  They brought their time and energy along with their skills to assist with the event. They are guided by Donna Bon, Sheetz Fellows Program Director, who was a wonderful collaborator with our team. We were very pleased that Steve and Nancy Sheetz were able to join us during the day to support the Sheetz Fellows and see what ArtsAltoona was able to accomplish with their help!

The highlight of the event for many was the creation of a mural on a building along the avenue! The concept and design was by our own board member, Pam Snyder Etters (also known as the Executive Director of the Altoona Symphony Orchestra and the Founder of MuralsTalk.)  Pam sketched out the picture to be painted and those attending had the opportunity to participate in filling it in with the paint.  The concept and execution were extraordinary!  Thanks to Pam, who spent the entire day in a lift, and to local artist Lynn Heverly who was by her side, and, to get it completed they returned in the wee hours of the next morning!

On May 12th ArtsAltoona produced a book festival in cooperation with the Altoona Area Public Library who served as hosts. Fifty authors from Central and Western PA participated in the event, several of them were highlighted during Author Q & A sessions.  It was very exciting to be hosting and meet the featured authors, John Pielmeier (Agnes of God) and John Russo (Night of the Living Dead).There were also musical performances, activities for children and even food trucks!  Those who attended seemed to enjoy the event.

Joy in the City LIVE!

ArtsAltoona was invited to participate in this event at the Blair County Convention Center by Troy Ferguson who hosts a public access show featuring “inspirational messages and real life stories of people and organizations having an impact in our City.” We had a table with our usual display of ArtsAltoona information as well as flyers from many of the local arts organizations featuring upcoming events. Kim Aboud, volunteer Marketing Director graciously hosted our table while George Sackandy, our Visionary leader, and I were interviewed about the past, present and future of ArtsAltoona.  We were very honored to be included in this inspiring and uplifting evening.

Due to difficulty balancing income and expense following our 3 big events we found it necessary to furlough much of our paid staff, including Kendyl Ramsey, Rue Moyer, Stephenie Schroth, Charlie Wynn, and Emily Evey. Gwen Fisher is still with us, but her hours are very much cut back. While we were unable to find enough volunteers after the staff layoffs to provide the “crafters runners” for the Arts Festival as planned, or to have an ArtsAltoona tent full time during the festival, we were still be present as part of the Explore Altoona Tourism Expo from n

The organization, however, is still alive and well with bare bones staffing and dedicated volunteers. We will be concentrating our efforts on formulating and implementing our advisory group the Arts, Business and Innovation Council; fundraising; and developing of our plans for the Studio Arts Center in the former Kress Building. We also intend to restart our After School Arts Program (ASAP) in the fall if we are successful in raising the necessary funds to make it sustainable. We will also continue with our website, calendar, Facebook, newsletter, YouTube, etc. as we continue to support and promote all of the existing arts, culture, history and heritage  organizations in the area!

Enjoy the many upcoming arts activities all over the area!