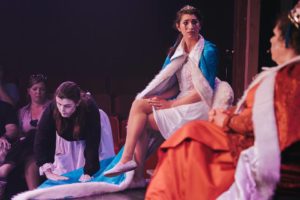 Humans are drawn to a strong narrative. Since the beginning of time, mankind has communicated through storytelling. Over time, narratives have been told through various forms, including theatre. After seeing a production of Clowns with Guns, reading and seeing theatre with difficult themes, and working on shows like Exit the King, I have noticed that there is an aversion to theatre that makes audience members uncomfortable. I happen to be an advocate for doing things that make me uncomfortable purposefully and have a huge love of theatre. Even Eleanor Roosevelt once said, “do one thing every day that scares you.” This can be applied to the average audience member or actor! There are some common misconceptions about theatre that scares audience members that I would like to dispel. 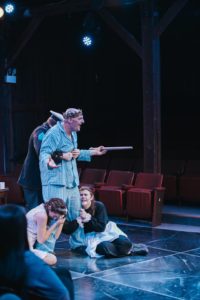 Myth #1: All theatre is created equally.

Some audience members tend to treat theatre as a form of escapism and if the show is not perceived to invoke positive feelings, it is not worth their time. Here is the reality. There are ethically written plays that challenge difficult topics, but ensure their audience members feel safe by the end of the show. There are also plays that do not have the audience’s safety in mind. In fact, some playwrights write shows to make sure their audience does not experience safety or closure in order to communicate a message.

In our community, local theatre companies such as Things Unseen Theatre Company and Cresson Lake Playhouse rely on creating trust in their audience members in order to produce difficult, complicated themed shows. For example, Cresson Lake does this by having an individual slot for a different, less popular playscript and doing loved, more popular shows throughout their season. This ensures season ticket holders trust the theatre company, do not feel alienated by a show with difficult themes, and makes volunteers who want to do interesting work at the company feel validated. Audiences feel safe seeing difficult theatre because the script was ethically written and the theatre company they are patronizing selected that play with both their volunteers and potential audience members in mind. 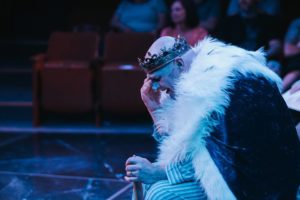 How many times have you heard, “life is hard enough; why would I want to watch theatre that is depressing?” Knowing that playscripts and theatre companies must have your trust first, let’s break down a show! The next show at Cresson Lake Playhouse is Exit the King by Eugène Ionesco. It is a French absurdist comedy about a king who is 400 years old who is about to die and is in denial. All the characters around him are aware of his imminent death except for him. An average audience member would assume the show is depressing and not go to see it. However, these themes make you question how you want to lead the rest of your life. The first time I heard the show out loud, it made me want to quit  my job and run away to New York City. After seeing a show like this, you realize this show you perceived to be depressing makes you question your life and happiness and thinking about that does amazing things for you.

Theatre does not have invoke positive emotions to be worth while. Theatre can be the catalyst for in-depth critical thinking. And if you take your friends to see the show with you, you can unpack the show and what it meant to you together. This “depressing” show has become a meaningful, entertaining evening. 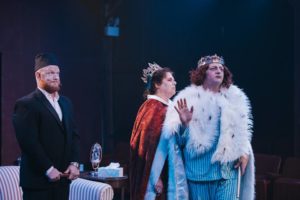 Myth #3: Complex theatre is inaccessible to the general public.

If you are afraid a performance will go over your head, but you are still interested in seeing it, you should still see it. Let’s look at Shakespeare for example. Shakespeare is a household name and you have to give his style a chance to best understand it. You may miss a few Old English words, here or there, but you usually can walk away from a Shakespeare production and feel like you got something out of it. Other stylized theatre shows are the same. Even if a show deals with difficult themes or is highly stylized, there is something in each show for everyone. 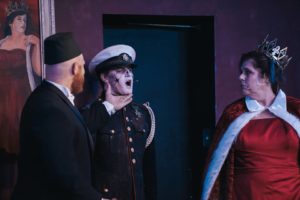 Theatre with these difficult themes or that is highly stylized is comparable to watching a movie. Think of some movies that you love to watch that make you cry or are abstract in style. Some movies that come to me are A Clockwork Orange, Gran Torino, Steel Magnolias, and anything Monty Python. In fact, Exit the King has a similar sense of humor to Monty Python. However, because live theatre is not accessible from your living room TV and you don’t have the freedom to stop watching, it’s hard to know what is worth watching in the theatre.

If you are willing to take the plunge, Exit the King starts May 29th and runs June 3rd at Cresson Lake Playhouse. Showings are May 29th – June 2nd at 7:30 pm and June 3rd at 2pm. Tickets are $10, $14, or $18 and can be purchased online here or at the door. As the Director’s Apprentice, I can promise you that it is very good and has a lot of adult humor (which I love). Break a leg to a very talented cast and crew!