I recently had the opportunity to spend a fun Saturday evening in a world of “poor man’s guitars,” as I checked out a performance by Shane Speal & the Snakes at Speal’s Tavern in New Alexandria.

For those not familiar with the name, Shane Speal – a western PA native now living in York – has become a connoisseur and expert in the world of vintage blues instruments, especially cigar box guitars. Several years ago, Shane opened the Cigar Box Guitar Museum inside his family’s bar business, Speal’s Tavern. Speal’s has become a popular live music venue, particularly for blues and roots music, and with the Cigar Box Guitar Museum, has become a sort of ‘Hard Rock Cafe’ for vintage instruments and blues history.

I had marked November 10 on my calendar several months ago, the date of Shane and his Snakes performing at Speal’s Tavern. Work duties prevented me from seeing Shane and the Snakes’ recent performances at McGarvey’s in Altoona. I figured at the very least that it would be cool to see Shane Speal & the Snakes at Shane’s family-owned music venue. But then this show became even more attractive, as Shane then announced that this night would also be the christening of his new and updated Cigar Box Guitar Museum. So with November weather cooperating, I embarked on the roadtrip to Speal’s Tavern.

This turned into an excellent and memorable evening. I arrived shortly into curator Shane’s presentation and tour of the new Cigar Box Guitar Museum, as he spotlighted the new additions and musical artifacts; his “guitarcheology” as documented in his new book, “Making Poor Man’s Guitars.”

“This is our gift to the world,” said Shane as he went around the room and introduced each instrument. The assortment of instruments was amazing, and each had its own story. Many of these dated from the Great Depression era…ham can guitars and ukuleles, one-string cigar-box guitars and violins, instruments made from gas cans, horse bridles, dresser drawers, biscuit tins, frying pans and more. Also displayed were some unusual curios such as a saxophone-shaped mandolin, unusual double-necked guitars such as the “Devil Girl Double Neck” and “Earle, the Evil Double-Neck” (found and recovered from the muck and devastation of Hurricane Katrina) and more. Many of these instruments were donated, and some were procured from flea markets or obtained online through eBay and other avenues. Many of these are documented in the new book, as well as on Shane’s website (www.shanespeal.com, currently being updated).

The performance itself was raucous and rowdy from start to end. Imagine Motorhead as a jug blues band, and you might have a general sense of what Shane Speal & the Snakes bring to the stage. Shane on his assortment of cigar box guitars and lead vocal howls and growls, Farmer Jon and Rick (on cajon this night) blasted through three sets of original tunes, interpretations of early blues tunes, medleys, and even raw early blues takes on select rock, pop, soul and country numbers. The highlights were many, from Shane and the Snakes’ rendition of the “Star Spangled Banner” early in the first set to many of the original songs – including the sinister “Strung Out, Drunk and Busted (And There’s a Body in the Trunk),” “49 Years,” “A Fat Man Will Love You (Like No Skinny Boy Can),” “Six Feet in the Hole,” “16 Miles to Saltsburg,” “When She Gets Drunk, She Gets Horny,” “Big Leg Woman,” and a couple from Shane and the Snakes’ latest album “Stay Primal” such as “Drinkin’ Beer” and “Quarter to Nine.”

Shane worked his various cigar box guitars, often displaying rigorous and greasy bottleneck slide work on the strings. He sang, howled and growled with the vigor of a Sunday morning minister, and brought passion and furvor into his presentation. Farmer Jon and Rick provided the rowdy rhythms and gang-shout choruses, and audience participation was frequently invited. As a result, Shane Speal & the Snakes triggered nonstop hootin,’ hollerin,’ fun and decadence with the packed house Speal’s crowd from start to finish. 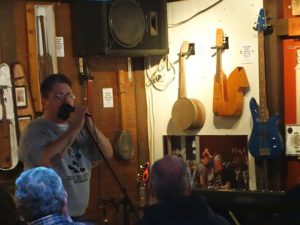 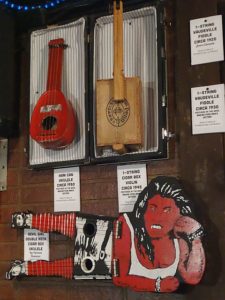 Some of the new artifacts include a ham can ukulele, a one-string cigar box violin, and a ‘Devil Girl’ double-neck cigar box ukulele. 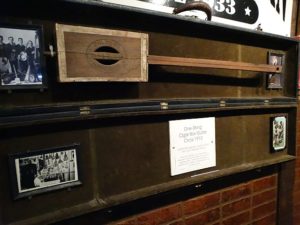 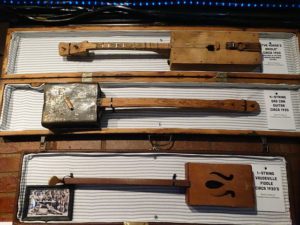 More interesting artifacts in the Cigar Box Guitar Museum include guitars made using horse bridles and gas cans. A guitar made from a dresser drawer is also on display in the room. 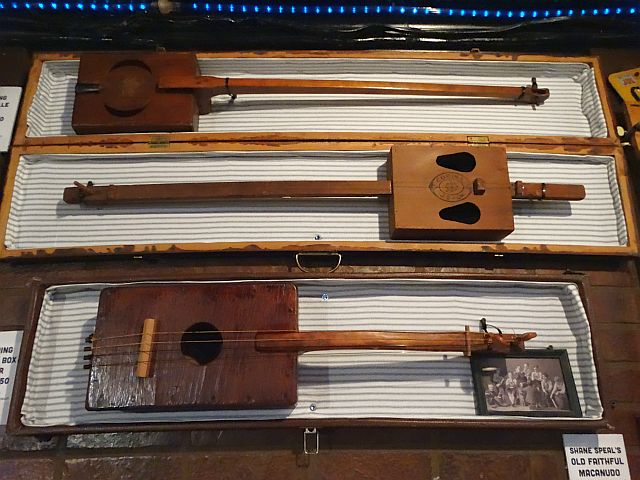 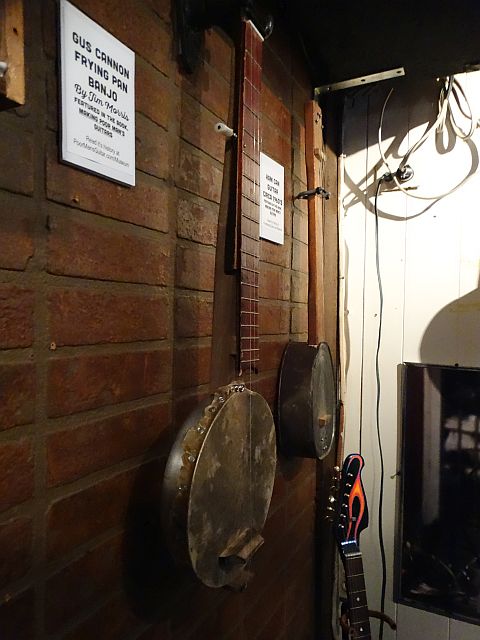 A frying pan banjo is displayed alongside a ham can guitar. 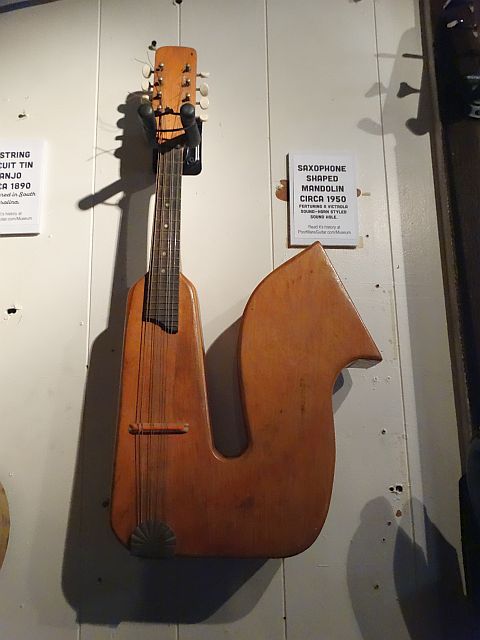 Another interesting artifact: a saxophone-shaped mandolin, with the sound emerging through the horn opening.

Earle, the “Evil Double Neck” – named because of some of the adornments on the outside of the instrument, including newspaper clippings and pictures of murder victims. 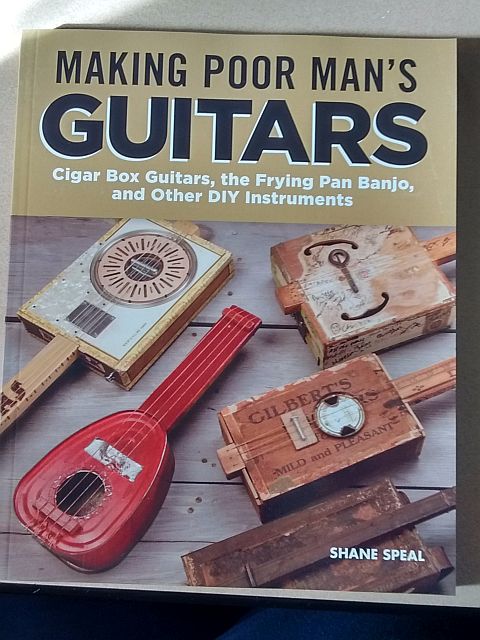 Shane Speal’s book, “Making Poor Man’s Guitars,” documents many of the instruments on display at the Cigar Box Guitar Museum, and offers instructions on how to make household musical instruments. 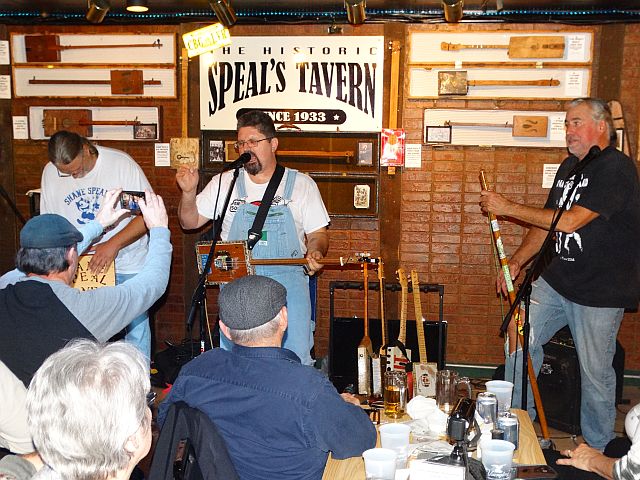 Shane Speal & the Snakes rock the house at Speal’s Tavern. 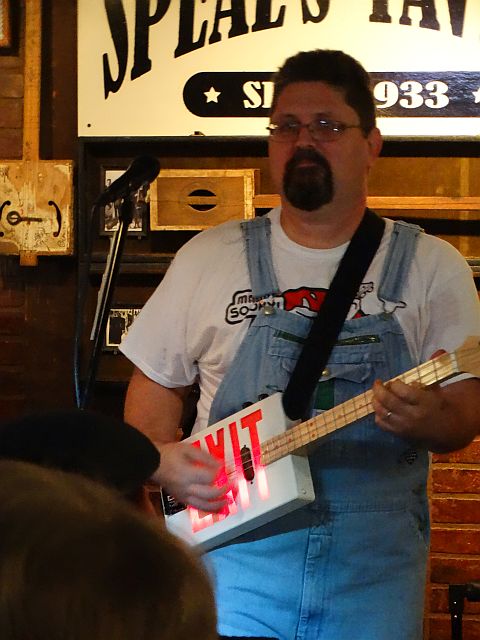 Shane Speal, playing a box guitar made from an exit sign. And the exit sign lights up! 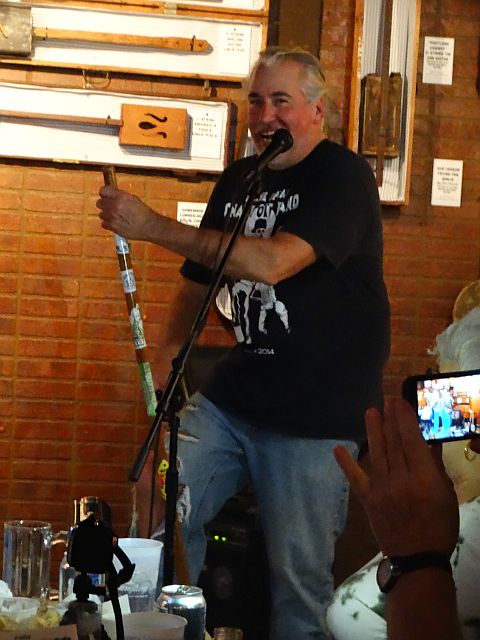 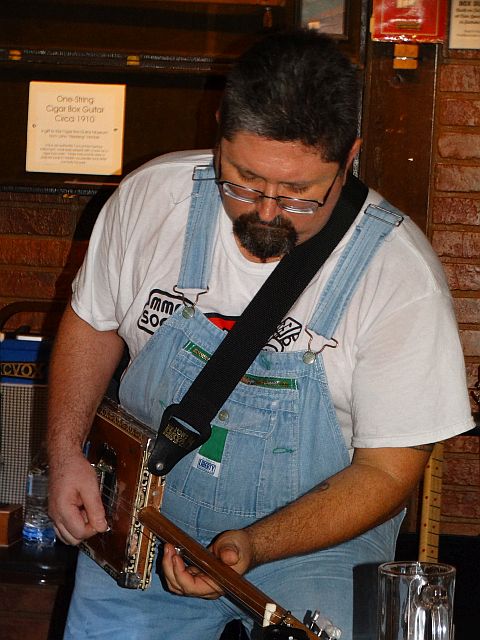 Shane Speal, working magic on one of his cigar box guitars.

This was a rewarding evening. Not only were the museum and music well worth my roadtrip, but happy vibes and hospitality of Speal’s Tavern made it worthy as well. This night was entertaining, fun…and educational.